An understanding of vertical and lateral trends in organofacies can be very important for both conventional and unconventional exploration, since the hydrocarbon-generative capacity of a source rock can vary greatly from one organofacies to another. We can identify, distinguish, and characterize organofacies using an appropriate combination of various types of geochemical data, including source-rock kinetics, biomarker distributions, gas chromatograms, carbon-isotope ratios, and visual kerogen analysis. In contrast to other companies, we make particular use of activation-energy distributions to identify organofacies, but whenever possible we supplement this approach with other types of geochemical data. 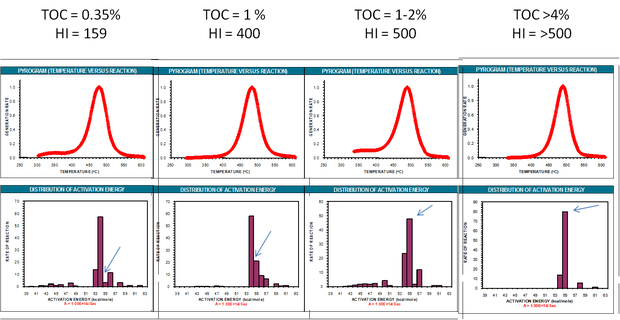 Ea distributions for four samples from a single formation in a single well derived assuming A = 1e14 -1. The kerogen in the sample on the right consists of nearly 100% Gloeocapsamorpha prisca, which has a very narrow Ea distribution with a maximum at 54 kcal. The sample on the left contains very little G. prisca (low amount of material at 54 kcal); it is instead dominated by other types of kerogen. Other samples show intermediate G. prisca contributions (blue arrows point to 54 kcal contribution). G. prisca is most dominant in the richest samples with the highest TOC values, an observation that would be included in the organofacies interpretation of the confirmed presence of G. prisca. These Ea differences are not readily visible in the pyrograms.

Left: Gas chromatogram of a sample consisting almost entirely of G. prisca, with the characteristic strong odd-carbon preference from C11 through C19, the paucity or complete lack of n-alkanes above C20, and the absence of pristane and phytane. Right: Gas chromatogram of a sample containing G. prisca and other types of organic matter. The unique G. prisca characteristics are muted, and pristane and phytane are reasonably abundant.