The broad category called “Thermal indicators” includes a variety of measured parameters that can provide information about the thermal history of rocks. We like to think of them as indicators of thermal stress. Geological events that can affect thermal history include burial, erosion, changes in surface temperature, igneous and hydrothermal events, groundwater flow, radiogenic heat production from sediments, and changes in basal heat flow through time. Although thermal indicators can be very useful, all of them have limitations and potentially serious weaknesses. Therefore, any application of thermal indicators in reconstructing geological and thermal history must begin with a critical evaluation of the validity of the indicators being used. Some thermal indicators, for example, require the presence of organic matter derived from terrestrial plants (vitrinite reflectance [VR or Ro], TAI), which can severely limit their application in non-clastic sediments or in rocks older than Devonian. Another example is that evolutionary changes in plants in parts of Southeast Asia, Australia, and New Zealand during the Tertiary yield a special type of “perhydrous” vitrinite that does not increase in reflectance as quickly as normal vitrinite, thus leading to “suppressed” Ro values and underestimation of the thermal stress the rocks have experienced.

Caution is essential in choosing the most appropriate thermal indicators for each specific case, and careful quality control of thermal indicator data should always be performed. We are particularly cautious about routine and universal usage of Ro data without the requisite QC, and thus recommend FAMM (e.g., Wilkins et al., 1992, 1995, 1997, 1998) and VIRF (Newman, 1997; Newman et al., 1997, 2000) as useful alternatives in cases where conventional Ro measurements are suspect.

We are also concerned about the misuse of Tmax derived from Rock-Eval pyrolysis. Tmax is calibrated to Ro only for Type II/III and Type III kerogens, but is often applied erroneously to kerogens of all types. The widely used conversion equation of Jarvie (1991) can lead to important errors because there is no exact universal relationship between Ro and Tmax. In addition, Tmax measurements have intrinsic measurement uncertainty of about ± 4C.

As an alternative or supplement to existing techniques, we recommend the use of the Mean Ea values derived from kerogen kinetic analysis (Waples et al., 2002, 2010). This parameter must be calibrated individually for each kerogen or organofacies, but once calibrated it can provide accurate assessments of Transformation Ratio (TR) from 0 to about 0.95 (that is, from 0% to 95% of hydrocarbons have been generated). Moreover, the TR values derived in this way can be easily correlated with Ro values. We derive the Mean Ea using data obtained from pyrolysis using Rock-Eval, SRA, or Hawk, and extraction of the kinetics using our proprietary ORFA software.

Much current unconventional exploration in the US focuses on Paleozoic rocks, where measured Ro values are often unreliable. In cases where the maturity is high because of deep burial or high heat flow, Mean Ea may not be fully satisfactory. In such cases we recommend that Conodont Alteration Index (CAI) be considered. Recent advances in linking CAI values to thermal history (Voldman et al., 2008) indicate that this technique may become much more useful than it has been in the past. We plan to include calculation of CAI values in our Novva software in the future.

StratoChem Services offers several types of thermal-indicator analysis in its own laboratory: Ro, TAI, and Mean Ea. VIRF can be obtained only through Jane Newman in New Zealand, while FAMM analysis is only performed by CSIRO in Sydney, Australia.

In addition, some biomarker parameters have been used as thermal indicators, although their history is spotty and most of them have a severely limited range of maturity over which they are applicable. Our favorite is the Ts/Tm ratio in the triterpanes, as determined by GC-MS analysis. However, this parameter, which in our experience is reliable and valid over a very wide range of maturity, must be calibrated for each kerogen type or organofacies. StratoChem provides Ts/Tm ratios routinely for all GC-MS analyses.

Rather than relying on a single molecular indicator of maturity, we prefer to use a “basket” of several indicators. We used this approach very successfully in our Three Forks Stain Study. The basket approach allows one to compensate for errors in any one indicator and to emphasize those indicators that function best at the level of maturity of each sample.

Other thermal indicators of some interest are apatite or zircon fission-track analysis (AFT, ZFT), fluid inclusion homogenization temperatures (FIHT), and gas-isotope data. We are happy to use those data in our interpretations if they are available.

Most maturity calculations carried out by existing software, including Novva, are based on the Easy%Ro algorithm developed by Lawrence Livermore National Laboratory (Sweeney and Burnham, 1990). We have not yet included the revised version of Easy%Ro, called “Easy%Ro-DL” in Novva, but we may do so in the near future. Novva also doesn’t include any effects of either fluid pressure or tectonic stress.

Voldman et al. (2008) have published a method for calculating CAI (Conodont Alteration Index) values for any given thermal history, but this method is not included in any existing commercial software. However, their CAI algorithms will be included in a future version of our Novva software.

Of course, calculating maturity correctly requires an accurate reconstruction of the thermal history of the rocks, as well as a good algorithm for converting a thermal history into an Ro value, and for calculating hydrocarbon generation. In our modeling work we pay particular attention to reconstructing unconformities as correctly as possible, since maximum temperature is often reached at maximum burial, prior to erosion. We also focus on linking our burial and heat-flow histories to the tectonic history, since tectonic events are often (but not always!) associated with conductive and/or convective thermal events.

We believe that source-rock kinetics and Hydrogen Index, often working together, provide the best way to directly evaluate the progress of hydrocarbon generation using laboratory analyses. We alone among geoscience consultancies have the ability to accurately calculate the Transformation Ratio (TR) of a kerogen from the measured Mean Activation Energy (Mean Ea) (e.g., Waples, 2016, 2018a), and from the present-day measured Hydrogen Index (Waples and Tobey, 2015). This information is of course important for conventional exploration plays, but it is absolutely essential for unconventional plays, where lack of local maturity cannot be compensated by migration from a distant mature kitchen. 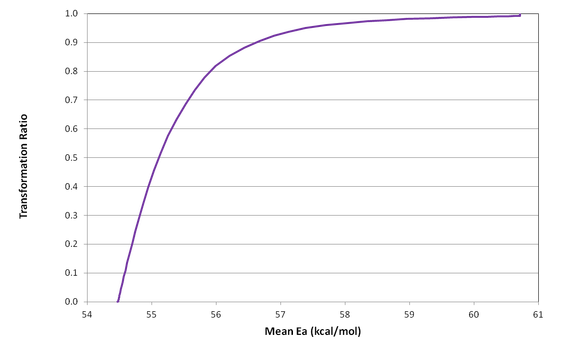 Plot of Transformation Ratio as a function of Mean activation energy for a kerogen. Each kerogen will have a unique relationship.

Hydrocarbon generation can also be calculated with confidence using a well-calibrated model for thermal history (thermal stress) and a proper description of the behavior of the kerogen (thermal strain) as a function of thermal stress. The keys to success in this calculation are to have a geologically realistic model and the best possible kinetics. We are experts in meeting both those requirements. 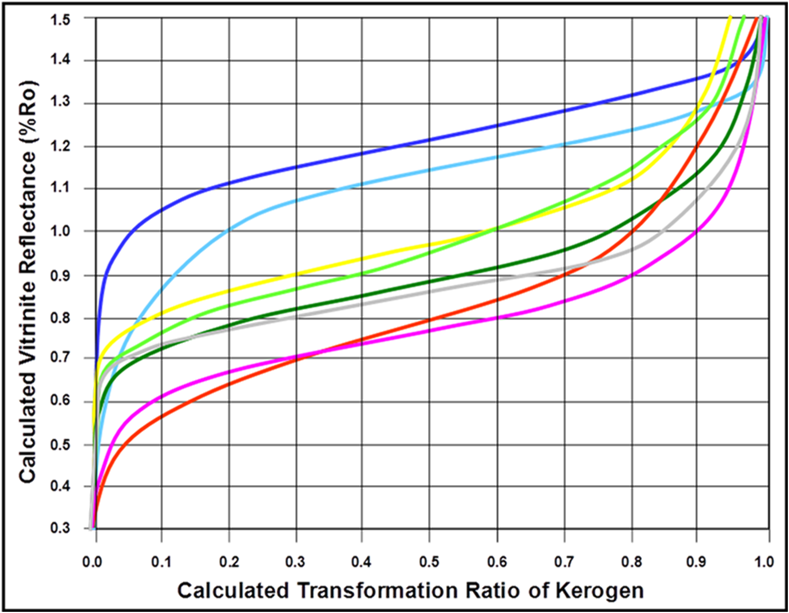 Calculated Ro vs calculated TR for a number of published sets of kerogen kinetics. Adapted from Waples and Marzi (1998) by Mark Tobey. A factors vary widely. Compare with the figure below, where all kerogens were assigned the same A factor.

In contrast, if we assign the same A factor to all kerogens, the variation in thermal stress-strain relationships is much smaller (see also Waples, 2018a). We believe this scenario is much closer to what happens in nature, and indicates that traditional methods of deriving source-rock kinetics can introduce major errors that could potentially devastate exploration applications. 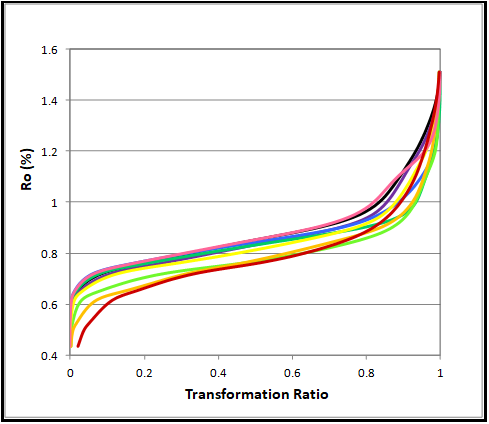 Calculated Ro vs calculated TR for unpublished sets of kerogen kinetics for several different source rocks. A factors were all chosen as 2e13 s-1. Compare with the figure above, where the A factors varied widely. See also Waples (2018a). 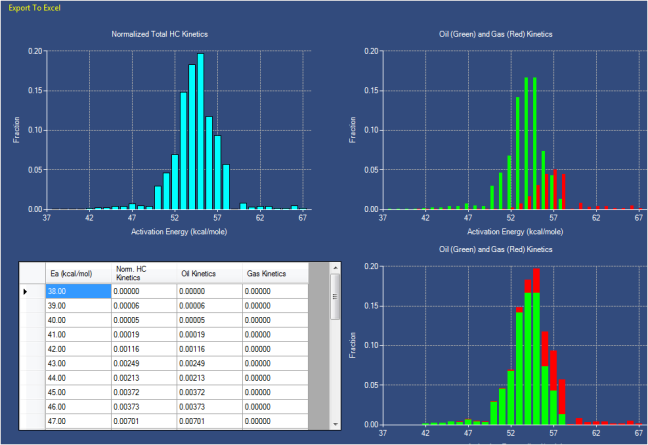 Kinetics for the Abu Roash “D,” which is a Type III kerogen that generates a significant percentage of gas. Cyan histogram shows total hydrocarbon kinetics, while the other two displays divide those kinetics into oil (green) and gas (red) kinetics, shown in two different formats.